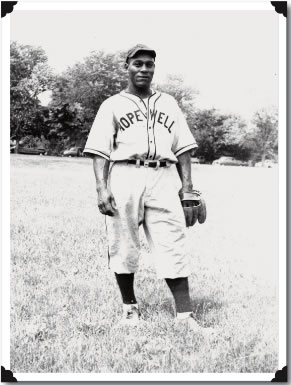 Not too long after the Second World War there was a baseball team in the Hopewell/ Pennington, New Jersey area called the “Pennington All Stars.” In case some are not familiar with baseball in that era, the team was made up of a group of young Black guys who just wanted to play ball. Nothing more, nothing less. However this was pre-Jackie Robinson America so never mind these guys just re- turned from serving in the Second World War and were newly married Black guys rearing young families, in those times society was what it was. According to witnesses this is how Shud won the game.

The hot shot team from Hopewell was all White and at the top of the league. The Pennington All Stars, however, wanted to play this team in the worst kind of way but the White team was not interested in playing the Black team and made it perfectly clear. As the season wore on and since they were at the top of the league, they finally consented to play the Black team, the Pennington All Stars.

The night before to the big game the All Stars got together with their manager, Mr. Hoagland, to discuss who was going to pitch the game. Since Mr. Hoagland had two sons, William and Chester who they called “Nin,” were currently on team, he wanted William to pitch the game. According to Uncle Dick Clark (Shud’s uncle who was a mere four years older) said he felt obliged to speak up and tell Mr. Hoagland that Shud should pitch the game because of his mean fast ball. Mr. Hoagland had other ideas. He said he thought William should pitch because William was more experienced and Shud could play short stop, as was his usual position. The manager’s decision caused everyone to be very upset but they had no choice but to go along with it.

When the day of the big game finally arrived Mr. Hoagland did exactly what he said he was going to do, put William in to pitch. Well, William pitched as well as he could but after pitching 3 or 4 innings the White team was up by about 7 runs and the All Stars were giving up and started to feel demoralized. They thought the “big game” was pretty much over. Finally, in what seemed like an eternity, Mr. Hoagland called Shud in from short stop to pitch. He made this decision with not a moment to spare because by this time Shud had time to sweat and stew and get really mad! Shud stepped to the plate and began to pitch what old timer say, “looked just like bullets!” That’s how mean his fast ball was. Shud threw so hard and fast that when the opposing team got up to bat they were so scared of Shud’s fastball they started to back away even before trying to swing. The Hopewell team didn’t score another run for the remainder of the game. The Pennington All Stars ended up winning the big game.

Addendum, March 2003
In March of 2003 William “Shud” Smith was posthumously honored for his athletic accomplishments and was inducted in the Hopewell Valley Athletic Hall of Fame.

Shud earned varsity honors three years in basketball, three in baseball and Shud was long recognized as one of the area’s best athletes and would have an excellent chance at a pro career (as told by a scout representing a professional baseball team).
Unfortunately this was long before Jackie Robinson broke the color barrier. 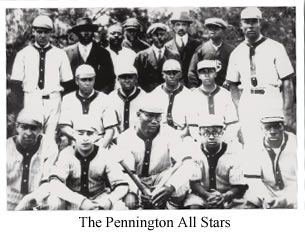